Nico Bunnik started making films at the beginning of the 90s. Because of his technical background (HTS-E), he also started to help other filmmakers with camera and sound, and built his first sound-studio in 1991 at the Vrije Academie, The Hague. This was fully analog; perfo-machines, timecode-multitrack-taperecorders etc. He did a lot of sound editing and mixing here. Next to this soundwork he worked as cameraman, first for his own 16mm movies and later he was asked to do camera for other filmmakers. He did a lot of 16mm camerawork there, mainly independend art movies and shoot on video for documentary.

In 1993 he was, with a couple of other filmmakers, initiator of the Filmstad foundation and he built up a studio for 16mm sound and film editing. Many technical updates followed and a lot of 16mm films were produced in this period (e.g. Filmblik). In 2008 Filmstad Studio becomes Nico’s own studio.

Over the years almost all analog machines have disappeared and have been replaced by computer, only two 16mm camera’s and a Nagra taperecorder with pilot-tone are left, just because they are so nice to look at.

With the change to digital projection in cinemas the final step in digital-cinema-making has been completed.

These are exciting days for filmmakers. Even though filmmaking can be “easier” and cheaper now, the art of filmmaking is still present today. deBun has the skills and the experience to assist you in your filmmaking. 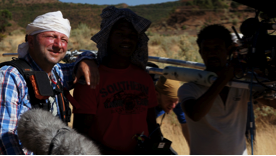